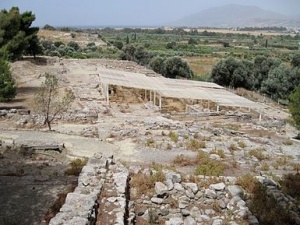 The Royal Villa was built in the 16th century B.C. (New Palace period). After the destruction of the palaces in 1450 B.C., only a small megaron of the Mycenaean type was built in their place. There is evidence that in the Geometric period (8th century B.C.) the site had religious function.In the Hellenistic period (4th-3rd centuries B.C.) the sanctuary of Zeus Velchanos was founded and much later, during the Venetian occupation, the area of the courtyard was occupied by the church of St. George Galatas (14th century A.D.).The Villa at Aghia Triada consists of two wings which form an L-shaped structure enclosing a court. Although it does not have the dimensions of the palaces at Knossos and Phaistos, it presents all the typical features of Minoan palatial architecture. It has halls with polythyra (pier-and-door partitions), light-wells, shrines, storerooms, repositories, workshops, staircases, porticoes, courtyards, terraces and balconies, streets and courtyards paved with flagstones. Numerous finds were uncovered in the villa during the excavations. 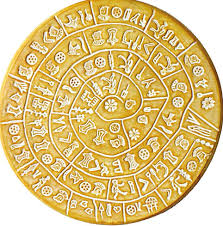 The site was firstly inhabited in the Neolithic times, but it reaches its zenith in the 15th century b.C.; it is in this period that are built the brilliant Palace and the city around it. The life of the Minoan city was short enough, as it was destroyed in the mid-15th century b.C. Although the city continues to exist during the Mycenaean and the Geometric times, it has lost its glory. Later, in the Archaic period a temple of Rhea is built at the southern part of the palace.

Hellenistic times are a period of flourishing for the city, which lasts until the 2nd century b.C., when it is conquered by the neighboring powerful city of Gortyna. The glory of Phaistos is forgotten ever since; only a few traces of the Venetian period in the area around indicate that people continued to live there. 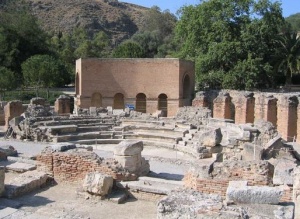 According to the archaeological evidence the area seems to have been inhabited as early as the end of the Neolithic period, approximately 3000 b.C. However, it is during the Late Minoan period (1660-1100 b.C.) that the site reaches its peak, as it is evidenced by the villa with the sanctuary excavated at the site of Kannia Mitropolis. The site continued to flourish in the Archaic period (7th century b.C.)and later, as it is shown both by the remains of the archaic settlement around the acropolis, and by the famous long inscription known as the Gortyn Law Code, which dates back to the 5th century b.C.

During the Hellenistic period (3rd -2nd centuries b.C.) Gortyna was still active; the Roman domination (1st-5th century A.D.) signals another peak period for the city, which was an close ally of the Romans and the capital city not only of the island, but also of the province of Cyrene in Africa. It was here that Apostle Titus, the protector of Crete, preached Christianity in 250 A.D. and Aghioi Deka (the ten saints) died martyrs during the period of persecutions of Christians by the emperor Decius.

Excavations started in 1884 by Italian archaeologists and are still in progress. Along with the excavations restoration works, mainly of the ancient buildings, are being done throughout all this period of time. In what concerns the Gortyn Law Code it has been embodied in the Northern circular wall of the Odeon, which is now housed within a small recent structure for protection reasons. 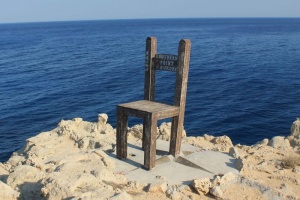 Gavdos is a unique gem of Southern Europe, away from the bustling “civilized” world, with wild beauty, with crystal blue waters, with dreamy sunrises, breathtaking sunsets, with amazing coastline and beaches, where cedars reach the sea; an island of great beauty that deserves to be discovered. The only thing that you have to do, is leave the easy resting on the extensive sand of Sarakiniko and Agiannis beaches and walk to discover the island, its inaccessible places and virgin beaches.

Gavdos has been identified as a possible site of the mythical Ogygia where Kalypso held Odysseus prisoner. Archaeological evidence showed that the Roman empire was active on the island.In the 1930s the island was used as a place of exile of communists; more than 250 people were exiled including leading figures of the Greek movement. 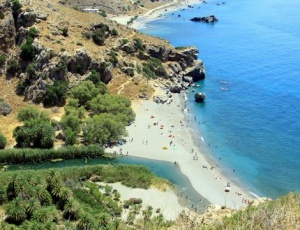 Preveli is located about 35km south of Rethymno and 10km east of Plakias. Beach of Preveli, also known as Lake Preveli or Phoenix, is located at the exit of the imposing Kourtaliotikos Gorge, where the Great River (Megas Potamos) is flowing.

It is certainly the most famous beach in southern Crete, accepting thousands of visitors every summer. During the 60s and 70s, it was a favorite destination for hippies. On the banks of the Grand River there is a large colony of Theophrastus palm trees, which give the region a sense of an African landscape. The river, forming a large lake, 1.5km long, before emptying into the sea, has water all year round. You can walk along the river, under the shade of palm trees and other trees, and start ascending in the beautiful canyon. You can swim in the cold ponds formed in the gorge. 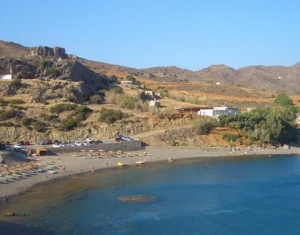 St. Paul Sandhills are one of the most romantic places on earth, offering spectacular sunsets (ideal for wedding proposals!). The best sunset can be viewed from the Mount Thronos, directly above the beach (some 300m high, vertical cliffs). In order to get to Thronos, it’s better to ask a local. However, if you don’t find anyone knowing, you have to follow the dirt track that heads to the west. The starting point of the dirt track is just next to the point where the roads Agios Pavlos – Sactouria and Triopetra-Agios Pavlos cross. This point overlooks Paximadia islets at south, Gavdos island and White Mountains.

The easiest way to get on the Sandhills is by following for 500m the road leading to the west of Triopetra harbor (Stomio), till you meet the beach in your right hand and the Akoumianos river below you. You can leave your car somewhere there, descend to the small valley shaped near the river and walk to the beach. Alternatively, you can park your car in St. Paul and then follow (for 5′-10′) the path that leads behind the western edge of the beach of St. Paul. 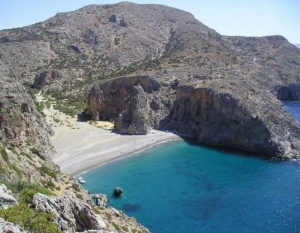 The beach of Agiofarago is located about 80km south of Heraklion city, at the exit of the homonym Gorge of Agiofarago. To get there you must either cross the gorge, by easy hiking of about 30-50’, or catch a boat from Matala, Agia Galini, or Kali Limenes. We definitely recommend the first option, as the route within the vertical walls of the gorge is breathtaking. On the way you will see the large caves were some hermits still live and the chapel of St. Anthony, with a well outside.

The beach at the exit of the gorge is stunning, with fine pebbles and clear blue waters, which are usually very calm. West of the beach a beautiful arch is formed, beneath which you can swim. Vertical cliffs surround the beach, on where you might see hermits praying. Nudism is not allowed here, like in all religious places of Crete. The beach is ideal for camping, but you must carry all your stuff in the gorge. However, you can ‘gain’ some weight if you do not take water with you, but collect it from the well in front of the chapel, located just 5’ away from the beach. You could also wash yourself there (without shampoo!). Next to the well there is a trough from where goats drink water. If you have time fill it with water and many goats will come to drink, thanking you!